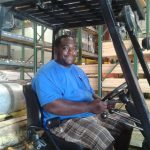 For Edmund Thomas getting a second chance was something he wasn’t sure that he would ever receive.

After serving seven and a half years in prison for dealing drugs, he was certain that maintaining steady employment would be difficult for him to achieve.

He has seen first hand that it is extremely difficult in these times to have someone give you a second chance when you have a felony on your record.

Then his luck finally changed. Jones Lumber Company in Henderson offered Edmund his second chance by partnering with WIOA’s On-the-Job Training program. By receiving reimbursement through WIOA to alleviate training costs, Jones Lumber Company hired him. Finally his life was starting to make a turn for the positive.

Edmund stated that “ I give thanks every day to God for the chance Jones Lumber Company and WIOA has given me. Without this job I could have easily turned back to my old way of life.”

He hopes his story will have an impact on others. He has given his testimony to some local youth groups, and wishes to become more involved in the area.