You are here: Home / Featured / The Department of Labor & Workforce Development holds meeting at SWHRA 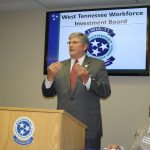 Burns Phillips, the Commissioner of the Department of Labor and Workforce Development, and a portion of his staff were special guests of SWHRA  and LWDA-11 on August 1st.

The purpose of the visit was to update area leaders and elected officials of the current status of the Department of Labor and Workforce Development.

Commissioner Phillips commented on the Governor’s Drive to 55 program which aims at increasing the percentage of Tennesseans with a post-secondary degree to 55 percent by the year 2025, but did acknowledge that college is not for everyone. He noted that many businesses do not require degrees, but that many of the potential employees lack the simple soft skills that make it nearly impossible for employers to hire them. Skills such as knowing how to dress, how to treat fellow employees, and showing up for work daily and on time have greatly been ignored by potential employees.

He urged the business leaders in attendance to come together as a team, pool all of their resources, determine the strengths and weaknesses, and from there overcome those weaknesses.

The issue of closing some of the area Tennessee Career Centers was also addressed during the meeting.

Commissioner Phillips explained that due to funding issues, that it became apparent that costs had to be cut. The department had a budgeted amount of money, and all non-recurring funds had been spent. We knew the areas where we had to spend money by law, and we had to allocate money to those programs. Thus, a decision was made to close many of the Career Centers across the state, however those who could serve the most people in the area (Jackson, Savannah) would remain open.

All WIOA offices in every county served by LWDA-11 will remain open.

He also noted that the unemployment insurance benefits process needs to  be repaired. The state has a plan, but it may take a couple of years to get the plan implemented. He explained that every single aspect of the unemployment insurance system is being reviewed, including all applications, handbooks, etc. He believes that once the plan is in place that it will truly be one of the best systems in the country.

Various members of the Department of Labor and Workforce Development  staff also addressed the audience on various issues. Linda Davis, the Employment Security Administrator, elaborated further on the current unemployment insurance benefits process. Marketing and Communications Administrator Melinda Williams, touched on getting the Workforce and Development  brand  more visible and also  explained the importance of Adult Education.  James Robertson, Assistant Administrator for Workforce Services, explained that the sequestration will combine WIOA, Wagner-Peyser, WOTC, and Veterans Programs into one  single division called “Workforce Services”. Closing out the meeting, Director of Field Operations Mike Daniel, discussed the Career Centers that remained open, and the importance of utilizing the mobile Career Coaches that are available.

Commissioner  Phillips was named acting Commissioner after Karla Davis resigned from the position in March. Governor Bill Haslam officially named him Commissioner in June. The 64-year-old received both a bachelor’s and master’s degrees from Middle Tennessee State University, and also has a law degree from the Nashville School of Law.